3rd World Telugu Writers’ Conference An Introduction to the Aim and Purpose of the Conference:: Dr. G V Purnachand 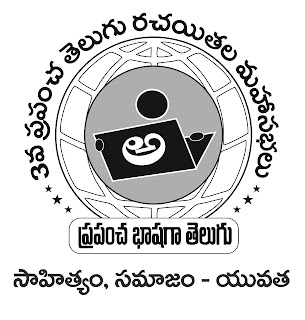 
An Introduction to the Aim and Purpose of the Conference

On 20th, 21st and 22nd (Friday, Saturday and Sunday) of September 2013, the Conference is going to be held in Sri Seshasai Kalyana Mandapam, M.G. Road, Vijayawada.

The 1st World Telugu Writers’ Conference held in September,2007 under the auspices of the Krishna District Writers’ Association initiated a powerful and successful Telugu Language Movement and inspired Telugu people, thus opening a new chapter in the history of the Telugu Language.
Keeping in view of the celebration of DIAMOND JUBILEE of the Independence of India, we released a book of Research Articles, “Vajrabharathi” in the conference which was well appreciated by literary critics.

In the month of August 2011, the Krishna District Writers’ association organized the 2nd World Telugu Writers’ Conference. A well designed programme for making Telugu a World Language took its formal shape
in the conference. The State Government , in that conference, announced its Membership in Uni-Code Consortium and Release of New Fonts and thereby expressed its willingness to developTelugu language in accordance with Modern Technical Knowledge.On this occasion the installation of the statue of “Telugu Talli” (Mother Telugu) and publication of a book of Research “Telugu Punnami” (Telugu in Full Moon) were also taken place

In order to bring a blossom in Telugu Language and Culture among the young generation, the 3rd World Telugu Writers Conference is providing a major role to young writers. As gradual deterioration is taking place in the role played by youth in the fields of Literature, Culture and Social activity, it is high time that, as a social responsibility, the light is focused on youth.

After globalization, in the past three decades,during which the society has entered the electronic age, the impact of foreign culture, Marketing financial systems, Free Market, Computer jobs have made the lives of the youth fast-going.

In any country, social change is a natural phenomenon. when the entire world can be seen in our hand, there is no use in making irrational arguments. But whenever the language and the Culture are endangered, the society gets ready to protect them. “The Jaanu Telugu Movement” started by poets like Somanatha fulfilled its responsibility. The Bhakti Movement , brought by poets like Annamayya and the Spoken Language Movement brought by Veeresalingam, Gurajada, Gidugu helped in bringing social awareness among Telugu people. The present Telugu Languge Movement with the aim of making Telugu as household language,school language and language of Administration and bringing the ancient grandeur of telugu and of making Telugu a World Language. World Telugu Writers’ Conference stand as protecting


shield for Telugu Language and Culture.

This is the main principal programme of the 3rd World Telugu Writers’ Conference. We hope that this conference is going to provide a fitting and proper place to young people in all the literary trends by forming a platform to chalk out a programme and execute it.
We are inviting renowned people in Telugu literature and culture. Experts in computer technology, Experts in Social matters, Stalwarts in the field of Journalism,  Important people in electronic media and celebrities in the fileds of Culture and literature.
We involve each and every one who has been working day and night for the nation-wide development of telugu language and culture to take part in the conference. It is an open and hearty invitation to all the young men and women who have literary zeal. We hope that this
conference will make the literary urge double among the youth as well as student community and create a meaningful and useful platform for them.
We make an appeal to teachers and heads of the Educational Institutions and Universities to pick up students who have literary taste and send them as delegates to the conference.

Good Opportunity to Young Writers:
1. In connection with the conference we are going to publish a special edition (collection) of the stories, verses, essays and songs and cartoons of young writers with the title MANA YUVATHA (Our Youth).For favour of publication in the said book, we invite young writers to come forward with their contributions. The contributions should be related to literature, social aspects and research. The best of them will be published in MANA YUVATHA. The writers are requested to send their articles before 15th August 2013.
2. We aim at the selection of young talented writers who can lead society constructively with their modern concepts.
3. There will be seminars and group discussions to give a comprehensive understanding to young writers on the various literary trends and social aspects.
4. “An exhibition of mini poems will be a special attraction of the conference. Mini poems (starting from 1970), Nanilu (Very short poems),, Rekkalu(Wings) and some other short
forms of Telugu poetry. Those wish to send their poems have to send before 15th August, 2013.
5. There will be Kavi Sammelanalu(Poetry reciting)for young writers exclusively.
6. Those young writers who wish to participatein kavi sammelanams have to send their names before 15th August 2013.Book Exhibition, Exhibition of Telugu Velugulu, Exhibition on History of Telugu People,Folk Art Exhbition, Cultural Programmes, Felicitationto Eminent Personalities and Release of Books etc.,

Delegates for Conference:
*All lovera of literature and culture may take part in the 3rd World Telugu Writers’ Conference. Mementos for delegates and certificatefor participation for participants will be given.
*Breakfast, Lunch and Dinner  for all the three days  for delegates are under hospitality.
Only to those, who send delegate fee before 15th August 2013, mementos will be presented. Kindly make a note of this.
As usualthe delegate fee is only Rs.300/-
Those who attend on behalf of Educational Institutions need not pay any delegate fee.The student delegates will be given a certificate of participation.However thay have to produce an Introductory letter from their concerned Institutions at the beginning og the conference.
The delegate fee may be sent as D.D or by M.O. in the name of the Krishna District Writers’ Association  to the office address of the association, before 15th August 2013. Those who send cheques have to send Rs. 325/-
We once again invite the young writers to take part in the conference in which great literary giants from all over the world are going to participate to initiate literary zeal and fervor among young writers and direct them to proceed with a social responsibility. We invite all the lovers of Telugu literature.
For further details of the conference, the General Secretary or the President of the Krishna District Writers’ association may be contacted.